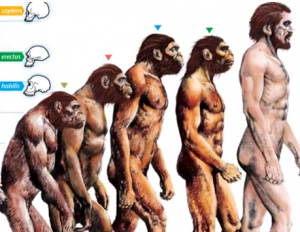 A recent study from the UK has found that the human foot may be less evolved than is widely thought.  Much of our understanding of the foot stems from research conducted in the 1930s that emphasised the role of the foot arch and its presumed rigidity in comparison to apes.

Research by a team from the Institute of Ageing and Chronic Disease at the University of Liverpool, however, has found this presumption to be flawed. By analysing more than 25,000 steps made by study subjects on a pressure-sensitive treadmill, they discovered that humans exhibit a similar degree of foot flexibility to chimpanzees and orangutans.

‘It has long been assumed that because we possess lateral and medial arches in our feet – the lateral one supposedly being rigid and supported in bone – that our feet differ markedly to those of our nearest relatives, whose mid-foot is fully flexible and makes regular ground contact,’ said study author professor Robin Crompton.

‘This supposed ‘uniqueness,’ however, has never been quantitatively tested. We found that the range of pressures exerted under the human mid-foot, and thus the internal mechanisms that drive them, were highly variable, so much so that they actually overlapped with those made by the great apes,’ Crompton said.

Dr. Karl Bates form the Institute of Ageing and Chronic Disease, said ‘Our ancestors probably first developed flexibility in their feet when they were primarily tree-dwelling, and moving on bendy branches, but as time passed and we became more and more ground-dwelling animals, some new features evolved to enable us to move quickly on the ground.’

‘We hypothesise that despite becoming nearly exclusively ground dwelling, we have retained flexibility in the feet to allow us to cope effectively with the differences in hard and soft ground surfaces which we encounter in long distance walking and running. The next part of our study will be testing this theory, which could offer a reason why humans can outrun a horse, for example, over long distances on irregular terrain’ Bates concluded.