To Squat or Not to Squat – That is NOT the Question. Just How?

The first movement I ever learned was the Squat when I was schooling up to become a trainer roughly 9 years ago. Looking back at how we were instructed to teach our clients was pretty off the mark in comparison to my standards now. We had been taught to keep our foot position in a frontal plain, to never allow the knee to go over the toe and restricting depth to a very limited range of motion.

Some argue this to be safer, though the reasoning is a little unsubstantiated. And also in many instances is not totally effective since the full depth (or at least below parallel) is required to get the full benefit for high range of motion sports.

When it comes to strength gains you can’t beat the squat. When done correctly and at the right intensity this movement has been shown to boost testosterone levels. As many of you know testosterone is responsible for maintaining muscles size and strength in both females and males (males you lucky buggers).

If you’re serious about your training you will know there are a number of ways that the squat can be done. And I’m not talking about the hideously improper form which makes you cringe that you see when you walk into any standard gym. I mean the basic variations of the standard squat, namely Front Squat, Back Squat (high bar) and Low Bar Back Squat. There are many other variations, however, these are typically the most common and are used for slightly different applications which we will cover below.

Breaking down the squat variants is important because all three are prescribed for very different reasons, sports and goals. To the untrained eye the differences may seem minimal, or even hardly noticeable, but closer detail shows significant biomechanical changes in levers and load distribution.

In the diagram below you can see the differences between (from left) a front squat, high bar back squat and low bar back squat. Even though the difference in bar placement is only several inches, depth and muscle recruitment can be greatly different in the sports world. Notice the knee joint angles, hip joint angles and torso angles (from verticle) that is required to keep the bar and centre of mass vertically above the base of support in each lift. 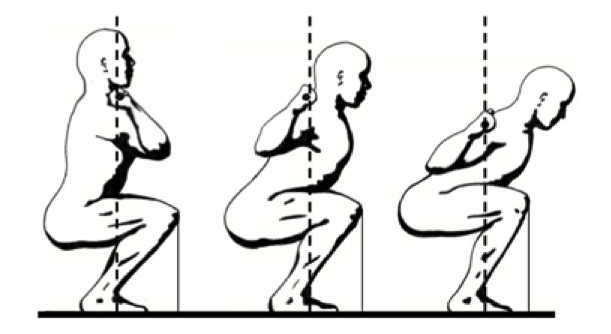 I suppose the next question is ‘what’s the difference and what purpose is each lift used for?’

The difference in bar position between high bar and low bar back squats is 2 to 3 inches, with the low bar further down the back sitting on the rear deltoid. This bar placement decreases the lever length of the torso (distance from hip to bar), requiring less torque to overcome the resistance on the back. Basically it is more mechanically efficient for the body to lift heavy. This lift also places more stretch on the posterior chain (Glutes and Hamstrings) which effectively makes them contribute more to the lift because the stretch has extra tension in it (and many hands make light work, or muscles for that matter). If you watch an Oly lifter squat, the depth is usually much deeper to that of a power lifter since their main aim is to get ‘under’ a weight that they can only lift so far off the ground. Power lifters are looking to get their hips just below parallel (to ‘pass’ a successful lift) and keep the levers of their body nice and tight to keep it as efficient as possible. It is commonly accepted that you should be able to lift roughly 10% more in a correctly-performed LBBS.

High bar back squat places the bar at the base of the neck on the upper traps. The heels are shoulder width or just within, and the torso is at a more upright angle. The knees typically track further over the toes to achieve the more upright torso and the quads are recruited more heavily to extend the knee from the deeper joint angle when pushing out of the bottom position.

While low bar back squat is typically used by power lifters and athletes that want to lift very heavy and do it efficiently for strength gains, you may still see many powerlifters use the high bar variation as that may simply be what they are used to and are more efficient at the technique they’ve practiced throughout their training history.

The front squat changes the knee/hip angles even more and produces even more of an upright torso to keep the bar (and centre of mass) over the base of support. You will find that this lift will be utilized much more in the Olympic Weightlifting and Crossfit world due to the Clean and Jerk and Thrusters (squat press) which require the lifter to support the weight in the ‘front rack’ position while at the bottom of a full squat.  To Squat or Not to Squat – That is NOT the Question!

If you compare the images of the lifter below it’s easy to see the difference in stance and depth. The Olympic high bar squat is a much more natural squat, often referred to as the third world squat, but for many is a difficult position to hold due to the flexibly required. 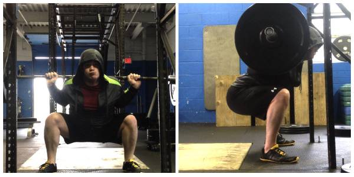 It is not a matter of right or wrong, but a matter of when and where. I have prescribed low bar back squats for clients with rounded shoulders to push them back into place and high bar back squats for heavy lifts as well. We never want to sacrifice form for weight, so when learning either style always start light and make sure you ask someone who knows what they are doing to check form.

Due to the fact that I mostly Olympic lift I use both High bar back squat and Front squat for cleans and for my snatch programing I also use the overhead squat, which is another variation again that we don’t need to go into here. But I am also a keen power lifter, so I do use the low bar back squat to squat heavy from time to time. The reason I had felt the need to write this was that there seemed to be a divide between what was better or ‘more correct’ between the low bar and the high bar back squat.

I hope this has cleared some questions, but if you have any further uncertainty you can email me at the contacts on our website below.

Download Article – To Squat or Not to Squat – That is NOT the Question!

About the Author: Marilyn Shilkin