The idea of HIIT, also known as High Intensity Intermittent Exercise (HIIE), is to alternate between higher intensity bouts of work, and lower, resting levels of work in various intervals. The main premise behind this is that working at an intensity that is higher than you are able to sustain is beneficial for stimulating physiological changes within the body that standard ‘steady state’ training wont tap into as much.  And since the intensity is impossible to sustain,  it means you have to throw in the recovery bouts in order to repeat the work again. If one could maintain the higher intensity for sustained periods of time then it simply wouldn’t class as HIIT. The classic HIIT style of training involves working typically anywhere from 20 to 60 seconds at near-maximal intensity repeatedly with a similar recovery period between each bout.

This style of training puts the body into a much deeper state of hypoxia (not enough oxygen) and higher into the anaerobic zone of energy production (where the body must produce energy at a rate that can only be done at the expense of great waste product accumulation, ie lactic acid), thereby challenging and stimulating the body’s anaerobic and aerobic energy systems. Basically, the ability to transport and utilise oxygen.

• Higher Excess Post-Exercise Oxygen Consumption, which means more oxygen (and calories) are being burned AFTER the session at a greater rate and for longer compared to that following lower intensity exercise

HIIT is most suitable for people who already have at least a small base of fitness to start with. This does not mean a beginner can’t benefit as it may be a great way to kick start them off by jumping in the deep end if they are keen enough to go hard from the start.  But the reality is that it is generally hard work.  So if one is very unconditioned, I suggest they spend more time initially acquiring the simple aerobic base before throwing in the high intensity bouts.  However, for those with at least a small base of conditioning to start with, you can really crank up the workout intensity and challenge the body much faster stimulating it to adapt faster in the benefits listed above. 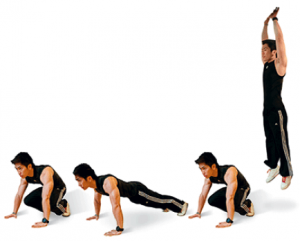 The HIIT principal can be applied to pretty much any exercise, so in that respect will depend on the exercise used.  But typically, most HIIT programs utilise whole body movements or cardiovascular based activity to provide the higher workload, e.g. running, cycling, compound resistance movements (pushes, pulls, squatting movements, etc), so these work mostly whole body muscle groups and main muscle groups, such as legs, arms, midsection, back, shoulders etc.  If it is something like cycling or running then obviously it is a bit more leg focused but still has a whole-body benefit.
Activities like running, bodyweight exercises such as squatting, pushups, situps, burpees, etc, or jumping can all be done without any equipment in fast, explosive bouts of high intensity with quick rest periods thrown in between each. You can always use a large hill or long staircase to run or ride up to provide the harder intensity (coming down being the lower level recovery). Activities like cycling need only your bike (stationary or treadly) or a pool/beach for swimming.  Though if you have access to free weights (barbells, dumbbells, kettlebels, etc) or other machines like rowers, Xtrainers, various climbers, etc.  then there is so much more you can do.  Again, HIIT can be applied to pretty much any activity that can be increased to a level that you CANNOT maintain. 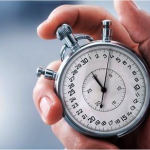 While there are some popular HIIT protocols of timing between work-rest periods, there is no set lengths of time that define HIIT.  One of the biggest influences on HIIT training was the well-renowned Tabata protocol.  The Japanese researcher, Tabata,  whose study of 8 rounds of 20 seconds flat out work on a cycling ergometer with 10-second rest between each, totalling 4mins workout, showed that, in just six weeks, the participants increased anaerobic capacity by 28 percent and had a 14 percent increase in their VO2max. This helped popularise HIIT in the 90’s within many sporting and training communities. While many HIIT sessions commonly bouts of intensity as short as this 20 second protocol, it is not uncommon to see many running and cycling HIIT workouts use up to 3 or 4 minutes of nonstop grueling work with a rest period (typically 1, 2 or even 3 times as long as the bout took) in between.

Give it a Go

If you’re not already using some intensity training in your repertoire and believe it might be beneficial for your goals then now is the time to give it a go. Remember to start with some base level fitness and feel free to change up the routine for variation to keep it interesting.