In 2009, in the Journal of Strength and Conditioning Research a study was published on the relationship between an athlete’s max squat strength and their sprint speed over five, ten and forty yards. 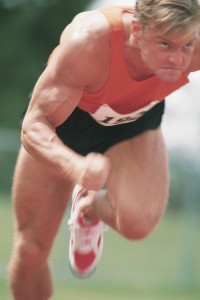 The purpose of the investigation was to clarify the significance of strength, specifically maximum multi-joint functional strength (the squat), in the topmost performance of sprint velocity. Previously, many studies had looked at strength correlations but typically only from single joint (leg extension) isolated exercises or isometric (static hold) contractions, and these investigations only found a small relationship between strength and sprint speed.

It appears that a free weight multi-joint structural measure of strength has a more significant predictive capability in terms of sprinting ability, which is not surprising since the ‘triple extension’ (extension of ankle, knee and hip, simultaneously) in squat is also the predominant movement in sprinting.

In this study, however, the squat was measured as a 1RM (repetition maximum) compared to their bodyweight. 1RM simply means the weight that the athlete can only lift for a maximum of 1 rep. If they could do 2 (or more) it would not be classed as a 1RM and wouldn’t represent their maximum weight. Then, this is shown relative to bodyweight by dividing the 1RM weight by bodyweight, such as 1RM/BW. For example, if I weighed 80kg and I could squat 140kg the max score would be 140/80 = 1.75, or 75% above bodyweight.

After measuring max squat strength of the athletes they then measured their sprint times over 5, 10 and 40 yards. They found a strong correlation between max squat strength and the sprint times at both the 10 and 40 yards but the 5 yards while being faster was not statistically significant. Being such a short distance I’d be surprised if anything was statistically significant in difference. Then, they divided the subjects into those who squatted 210% of their bodyweight or more (1RM/BW = 2.1+) and those who could squat 190% or less (1.9-). With this division the results were very clear that the subjects in the stronger group of squats had very statistically significant lower sprint times at 10 and 40 yards in comparison with those in the weaker squat group. This provides additional evidence of the importance of maximal squat strength relative to bodyweight concerning sprinting capabilities in competitive athletes.